My friend Khushi and I set out on my mom's Vespa into Chorla Ghat to catch some winter bird action on a cold December morning during the pandemic in 2020. A couple of hours into the trip, we spotted a family of Bonnet Macaques (Macaca radiata) on the side of the road. This spotting triggered an ongoing multi-sited story on the Bonnet Macaques (Macaca radiata) and the Rhesus Macaque (Macaca mulatta) in India.
All photographs and videos by Saish Solankar.
Monkeys are not an uncommon sight growing up in the Western Ghats of India. My childhood was filled with observing raids by monkey troops in residential areas, once a month at the least. The mischievous Hanuman Langurs (Semnopithecus entellus*) and Bonnet Macaques (Macaca radiata) are the most common non-human primate species in this part of the world. Stories of monkeys snatching food from people's hands and even slapping humans were amusing mainstays. Taxonomically, the Langurs and the Macaques belong to different subfamilies within the Old-World Monkeys or the Cercopithecids. From my observations, the Pink-Faced Macaques were the shy-er monkeys, which made them all the more interesting to me.
That morning on the Vespa, after having seen a giant rare Eagle Owl (Bubo bengalensis) roadkill, a troop of Macaques wasn't the most exciting spotting. Or so I thought until I saw a large male with a pack of Parle's 20-20 biscuits in his hands. I was carrying a borrowed camera and tripod with me that day, and immediately set up a shot of this. While the camera recorded everything, I observed the Macaque go through the pack like a human would - while acknowledging that he was being watched by two overly-curious young humans. This interaction provoked questions in my mind about evolution - Hominid, and in general - animal adaptations in the Anthropocene, and Multispecies Worlds.
*There is a great deal of confusion over the taxonomy of the Hanuman/Grey Langur. The populations in Southern India were classified as Semnopithecus dussumieri in 2005, however, later genetic evidence invalidated the taxon, and the Southern populations are now ascribed as S. entellus, or perhaps a subspecies.

A short documentation of the Bonnet Macaque (Macaca radiata) going through a pack of biscuits on film.

The Bonnet Macaque eating a biscuit out of the Parle 20-20 packet.

What evolutionary adaptations allow these species to thrive in areas under severe anthropogenic stress? What kind of politics, socialities, reciprocities, and ecosystems are entailed in human-monkey interactions in this part of the world? What does the Macaque tell us about our species? Observing this troop in the Ghats gave an insight into the evolutionary features in the Macaques' arsenal that make them the prolific species that they are. These animals are incredible at adapting to environments and navigating through tricky situations. For starters, opposable thumbs and opposable big toes. While our lineage - the Hominin lineage - evolved to lose opposable big toes in favor of bipedalism, this feature serves the non-human primates really well. Dexterous holding-devices on all four limbs allow these primates to move seamlessly through the canopies that they live in. Further, the species within the subfamily Cercopithecinae possess cheek pouches. Cheek pouches are a characteristic feature of Cercopithecine, and Macaques store some of their food in these pouches and can eat this food later. This helps them get away from danger without sacrificing hard-earned calories. This is probably one of the features that allow the macaques to conduct long raids in human residential areas. These monkeys are probably the most adept at living around humans, alongside rodents and corvids.

A Bonnet Macaque holds on to a small branch while perching on a tree with its feet. This shows the opposable big toes at work - an essential adaptation for life in the canopy for these monkeys.

I cannot think of a better scene than a Bonnet Macaque reminiscing the best moments of its life! This Macaque has stored some food in its cheek pouch, as can be seen on the left of its face in this photograph. The troop was not feeding at this spot, so I can only assume that the Macaque got this food from somewhere else and was waiting for the right time to get to the saved food. He was praying before the meal as a mark of gratitude, perhaps?

All of these features allow these monkeys to thrive in their habitats and in human habitats with such grace that one could even say that the jungle and the concrete jungle are both their habitats. With them living in such close quarters with humans and their open and curious attitudes, what interactions are they forming? What multispecies worlds are being created? To answer this question, I shifted my attention to the Rhesus Macaque (Macaca mulatta) in Northern India. The Northern siblings of the Bonnet Macaque are arguably braver, rasher, and more in touch with their human cousins as compared to their Southern, tropical rainforest-dwelling counterparts. It is this species that features in Radhika Govindrajan's multispecies ethnography in Kumaon (2018), in a dedicated chapter titled "Outsider Monkey, Insider Monkey." Govindarajan talks about the insider-outsider politics within the people of Kumaon and their reflection on these politics within their perspectives on Pahari, or native, and non-native, exiled macaques.
The monkey is god. A widespread iconography around the Hindu world in form of Lord Hanuman and his army that aided Lord Rama in his fight against Raavana. Religion and religious places, I observed, play quite a role in the multispecies lives of these primates, with so many temples and pilgrims here. How does the Rhesus Macaque live in this part of the country? I traveled to the Himalayas in Himachal Pradesh, around seven hundred kilometers north of Govindrajan's field site. Here, the Macaques were more common than I was used to in the Ghats, and they were considerably bolder. I can only speculate this is due to their habitats being more fragmented than in the rainforest, and their encountering more humans here. Regardless, this trip made for a great one for me as a photographer.
During my first day in Dalhousie, I came across over a dozen Macaques on the streets, casually going about their day like the humans there. A mating pair caught my eye. The pair, while engaged in the act, was looking all around their environment. Weirdly enough, their moments were coordinated for the most part (as can be seen in the photo series at the bottom of this page). How were they communicating where to look (if at all they were)? Again, good photographs. I made a quick search on google scholar about non-human primates mating solely for pleasure: but no specific results. A great doctoral research question, what say?

A pair of Rhesus Macaques (Macaca mulatta) mating on the compound wall of a house in Dalhousie, Himachal Pradesh. The Tibetan prayer flags on the house made for a great background to the scene of this contemplative pair. They were observing the humans passing by while engaging in the act. They even looked into my lens for a brief moment before moving away, with such choreographed coordination!

Local community members outside a Shiva Temple in Himachal Pradesh. Religion and religious places, I observed, play quite a role in the multispecies lives of the primates, with so many temples and pilgrims here.

With so many people around, these monkeys have to be bold, curious, and intuitive. There was a fun fair (mobile amusement park??) happening at the Chamunda Devi temple where I reached, as it turns out, at the perfect timing for this story. Fairs and events like these can get very noisy. A little too noisy for most wild animals. However, our Rhesus Macaque cousins do not seem to mind, at all. They are used to all the chaos, and even seem to thrive in this environment. Besides the noise, these places are also sites of great pollution and garbage. The bold cosmopolitan lives of these primates allow for great opportunities for food. Interestingly, human garbage can be a source of food for these primates - one man's trash is another man's treasure! I observed a female Macaque dig through a garbage can outside the fair. She also seemed to have found some good stuff in the garbage.
Through being an important icon in the faith and belief systems of the people here, the monkey is enriching human life. Through being an invasive species at Govindrajan's field site, as a factor of human management, the same species is altering human lives and perceptions. On the other hand, the human exercises its power by relocating populations in some cases and nourishing the monkey through the waste it produces. In these complex ways, we see both - the human and the monkey - play a role in the becoming of the other. Multispecies reciprocity manifests itself through such complex entanglements and encounters.

A female Rhesus Macaque digs through a Koodadaan - a Garbage Can - outside of a fun fair near the Chamunda Devi temple. I was lucky enough to be there at the right time to spot this - however, I was unfortunately not carrying my camera at the time. I had to click this frame on my phone, which caused the low-light to dictate the quality of the photograph. I'm still happy with the frame, though.

In my exploration of this story, I am going to go back eight years - it is 2014. As a curious eighth grader, the raids of the monkey troops were not just another inconvenience - it was an exposure to an incredible species, so similar to our own. A species that collaborated. A species that innovated. I was drawn to how cool they were. With my dad's old camera in the house (the same one I made the Himachal photographs with!), I clicked an eighth-grader photographer of the Hanuman Langur (Semnopithecus sp.) and posted it on Facebook captioned "Monkey Thieves," after the National Geographic Television Series. In that photo, the Langur has a cob of corn in its hands, that it stole from my neighbor's house farm.​​​​​​​

A screenshot of a photo of a Hanuman Langur (Semnopithecus sp.) on my Facebook timeline from 2014. My fascination with the species, and Wildlife, in general, dates all the way back!

A Bonnet Macaque from Chorla observing the back of its own hand, as it holds a branch with it.

Going back to where this story started - in Chorla Ghat on that winter morning - I observed this one male staring at something. Upon looking closer, it was staring at the back of his own hand. I can recall the hundreds of moments where I have found myself and people around me lost in looking at our hands, or legs, or ourselves in the mirror. While I cannot scientifically lay down what was happening here, I will end this piece by saying that these animals can tell us so much about our own species.
fin. 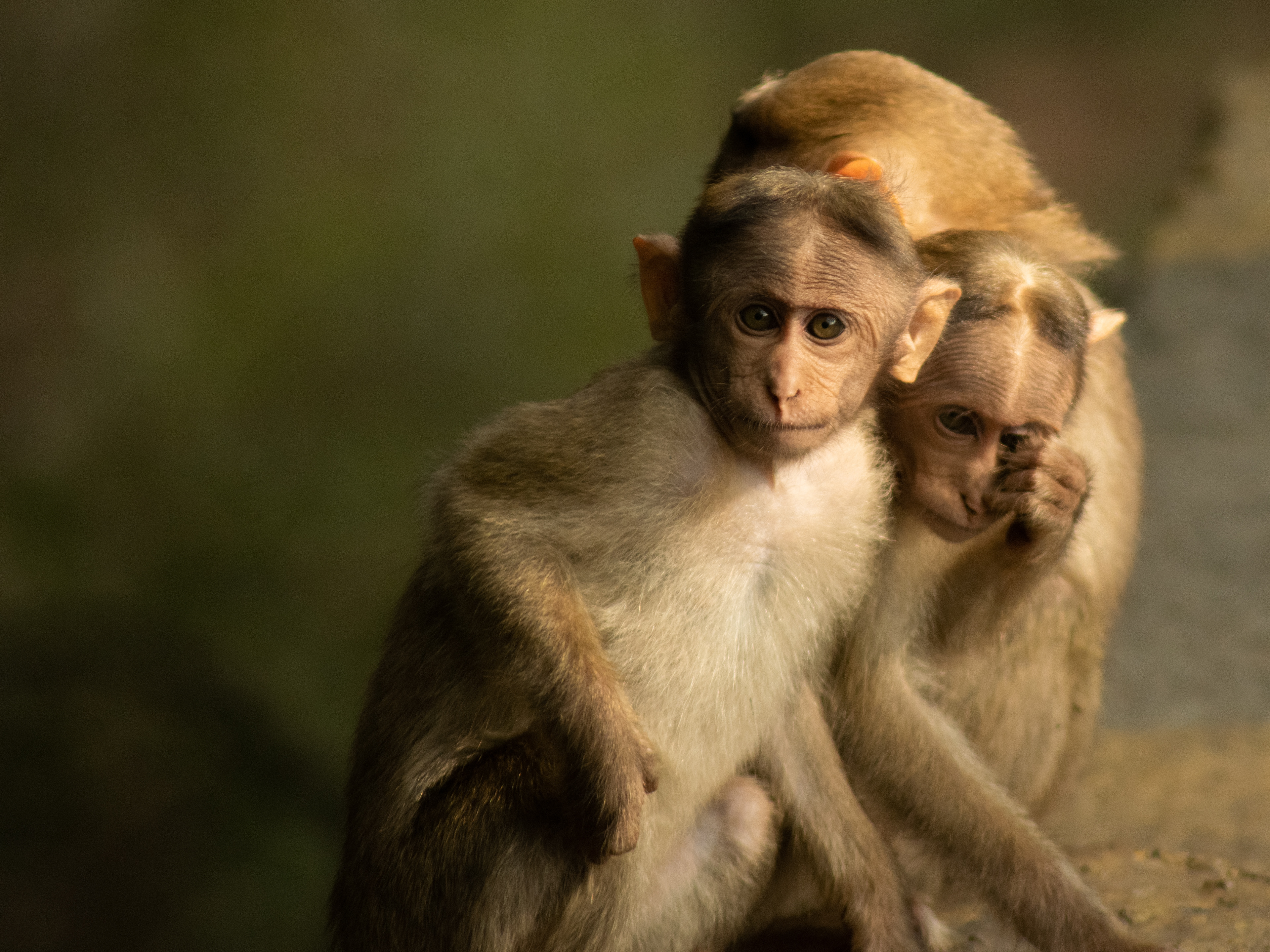 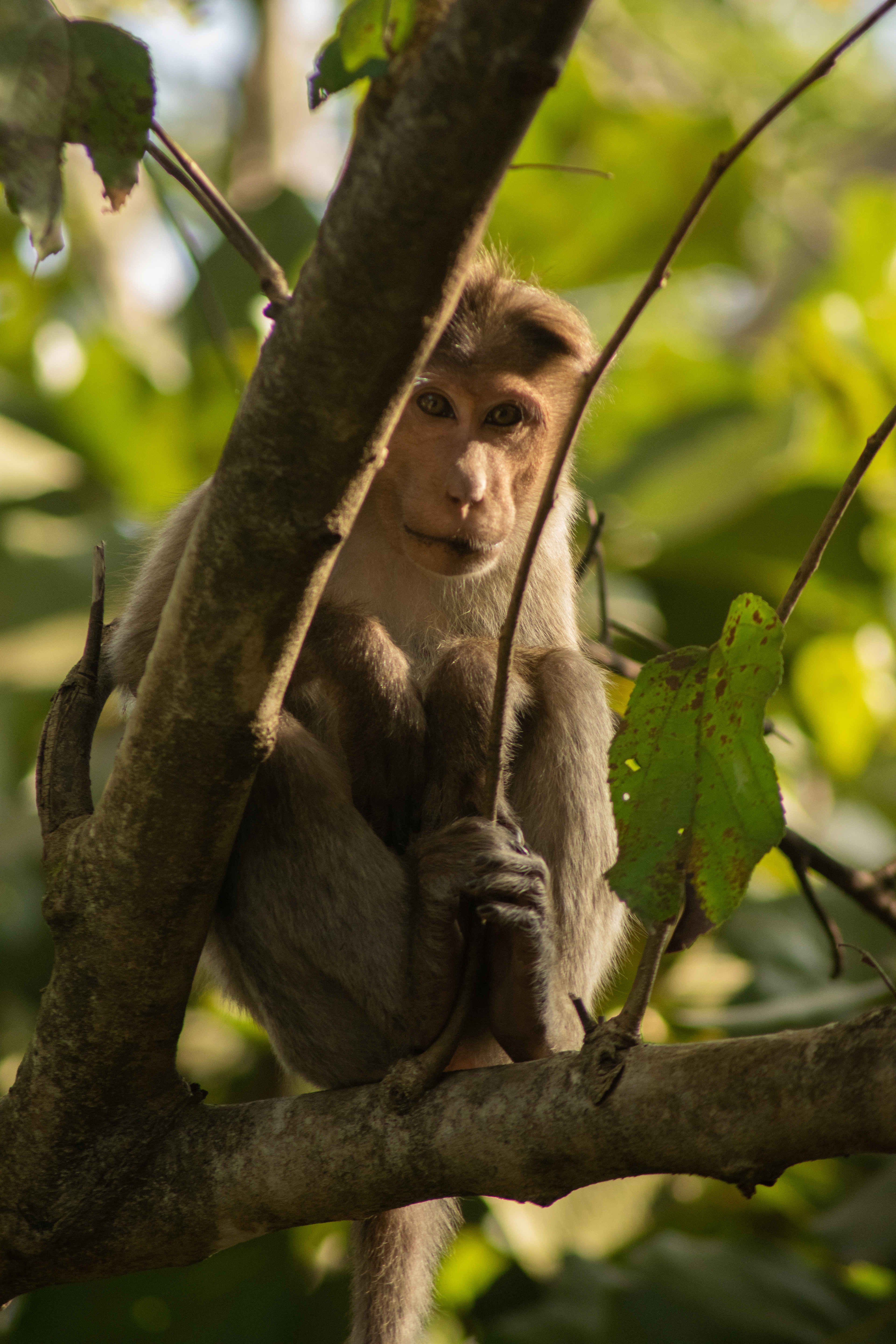 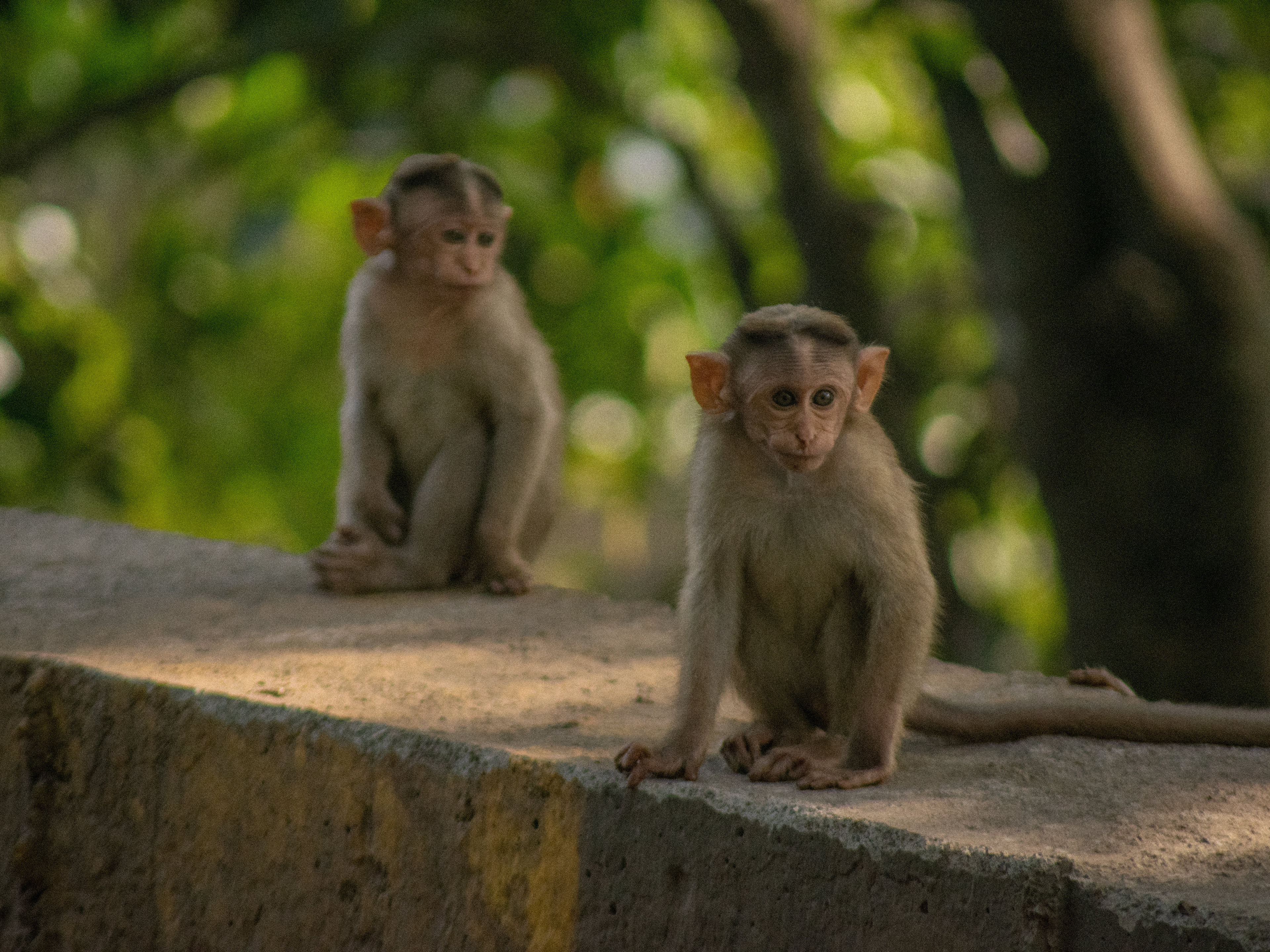 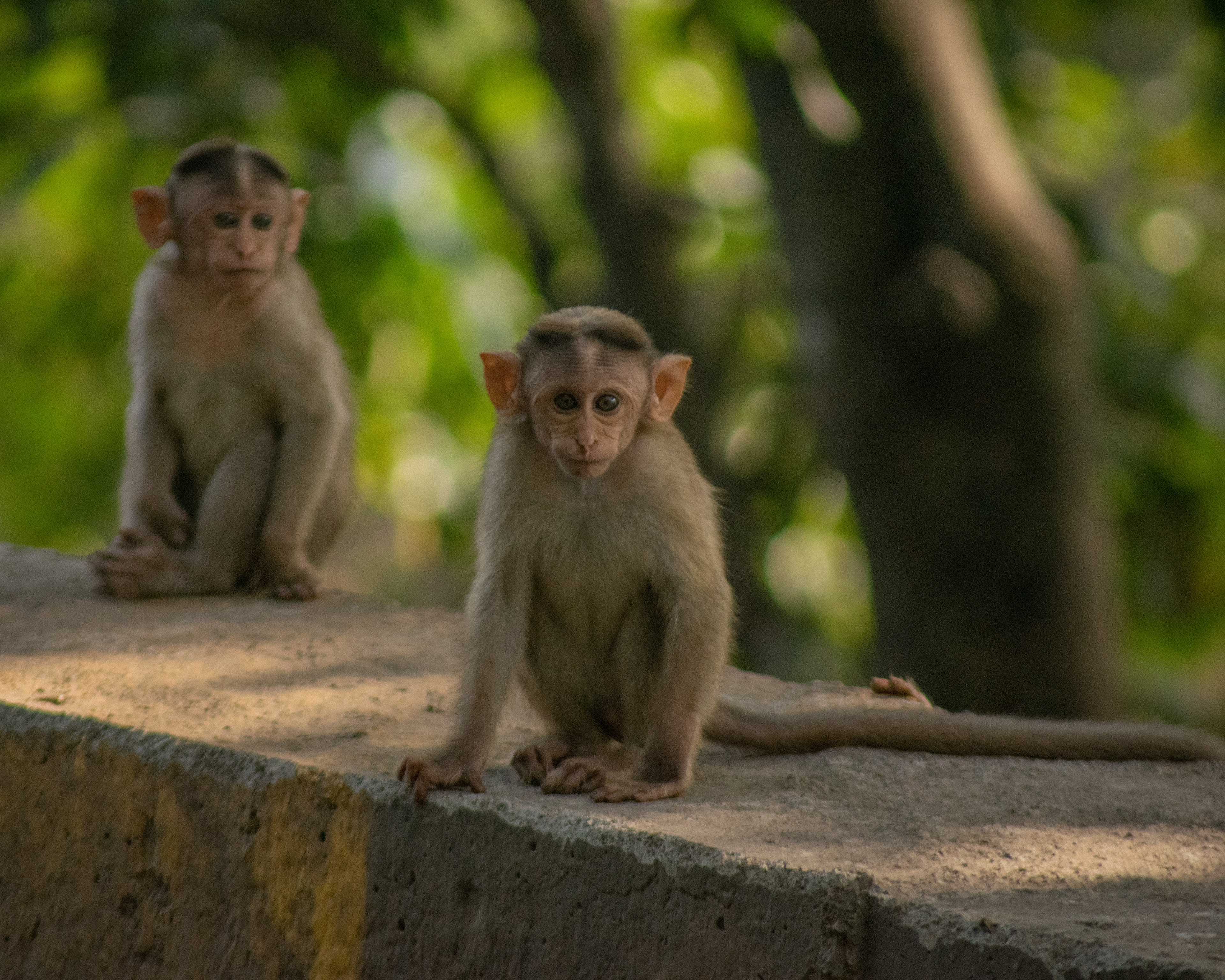 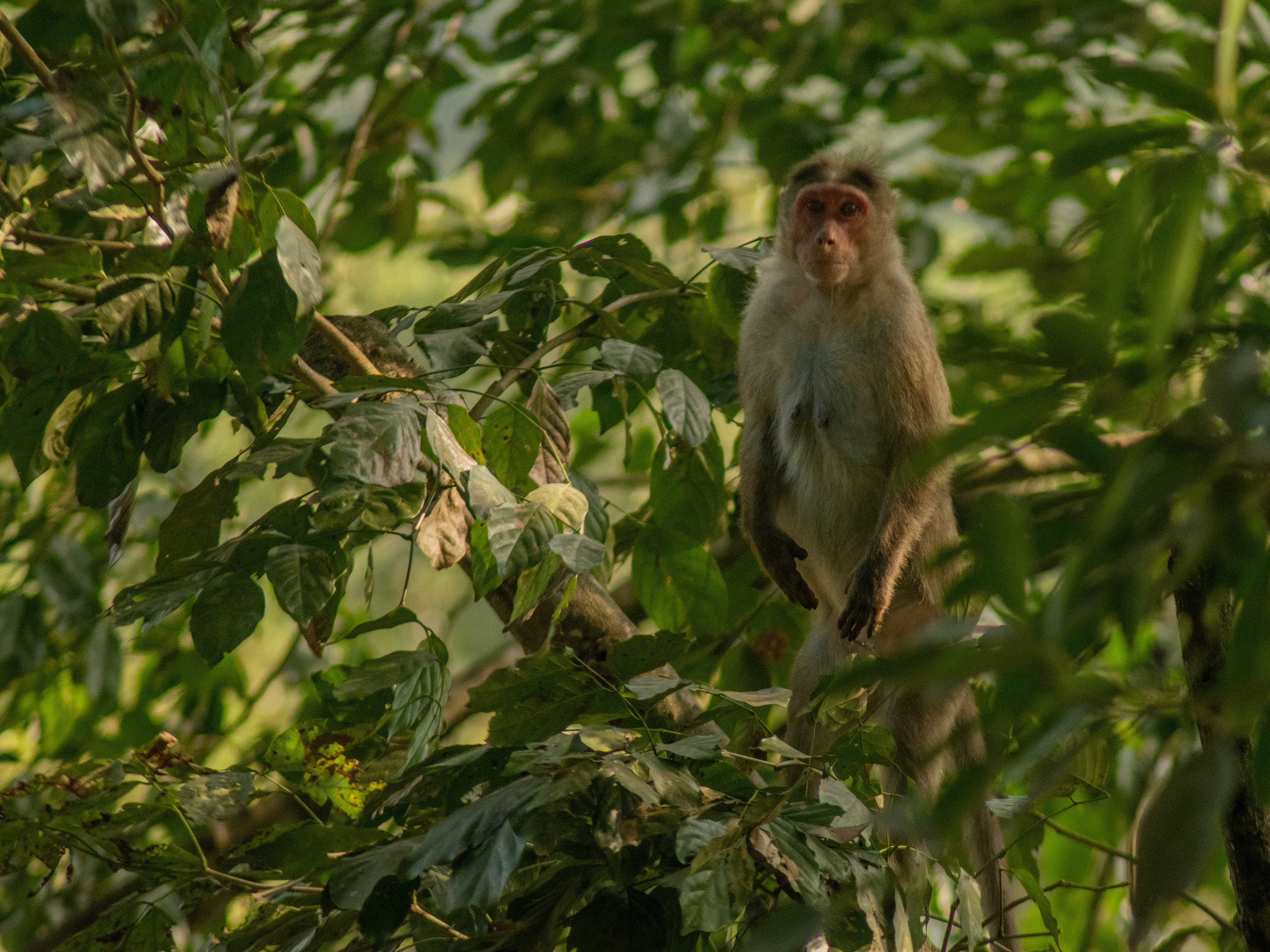 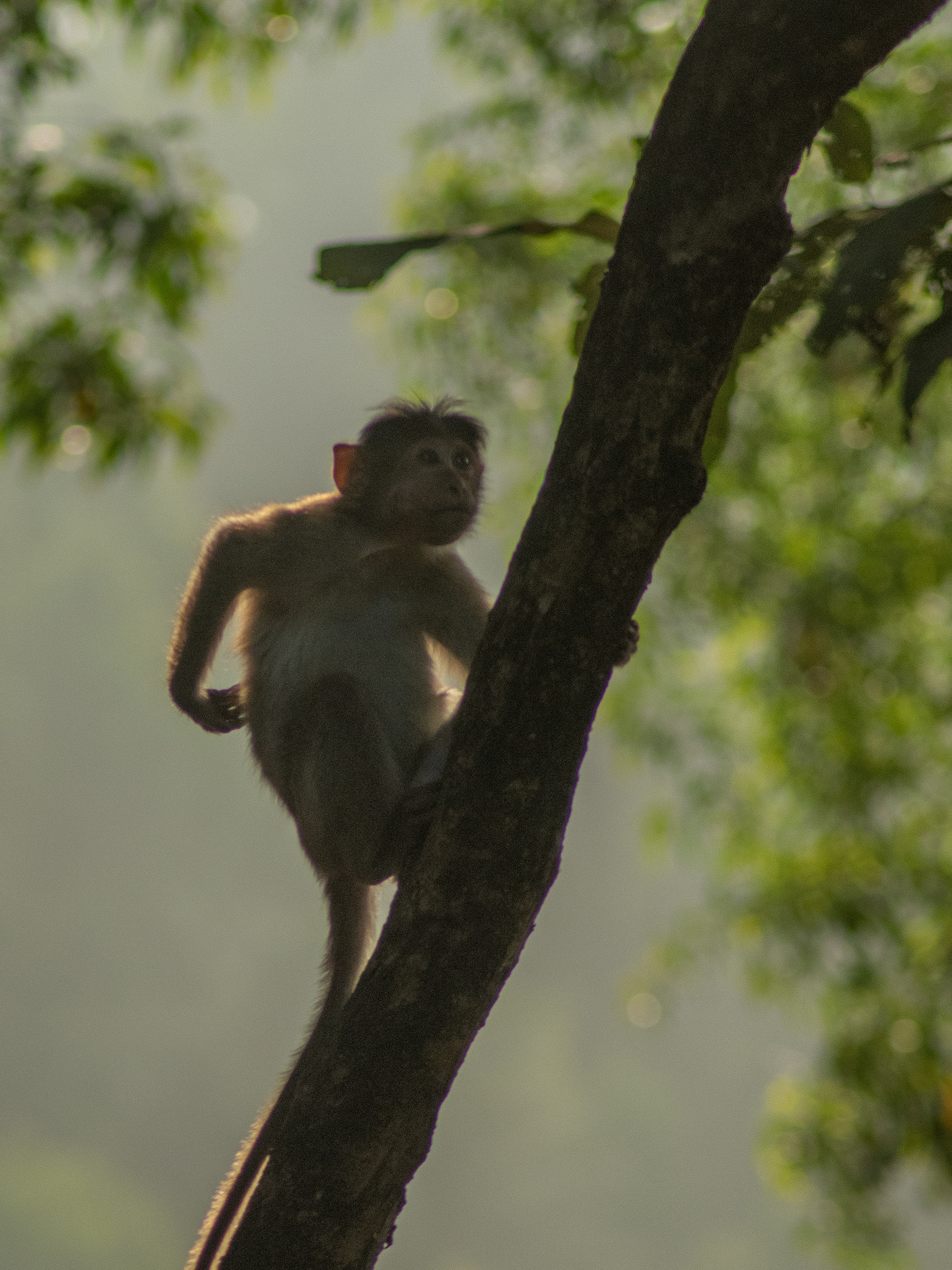 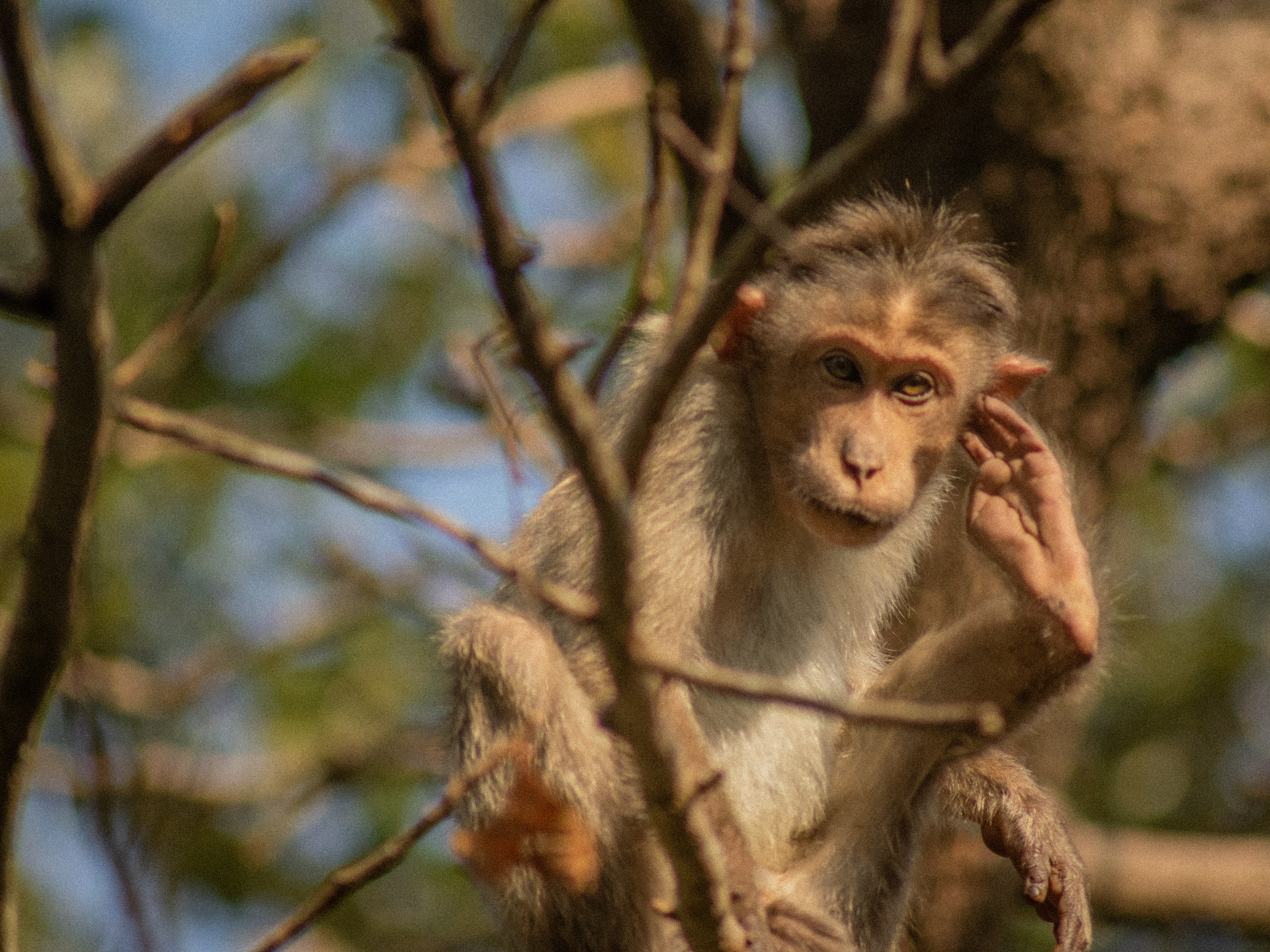 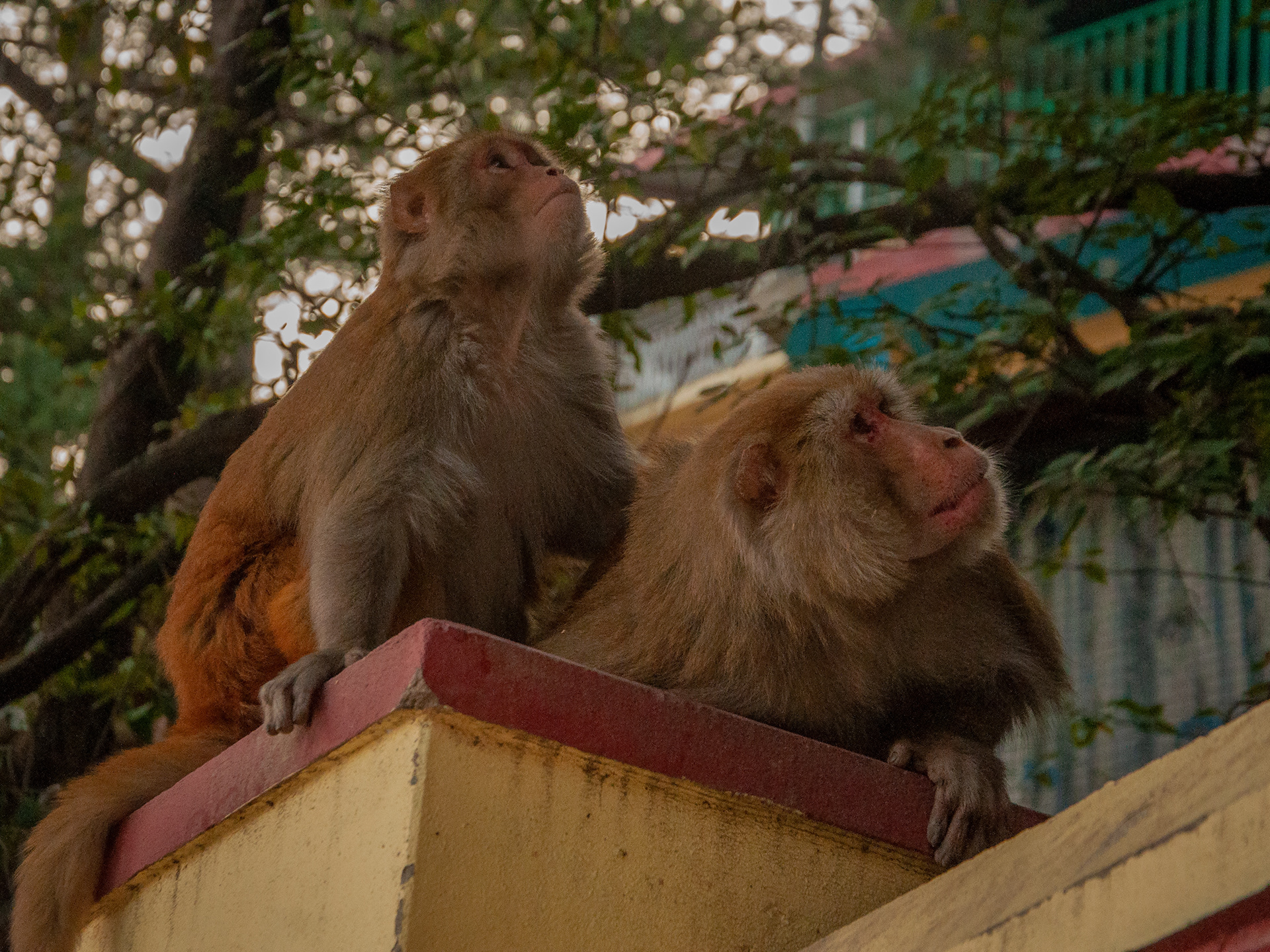 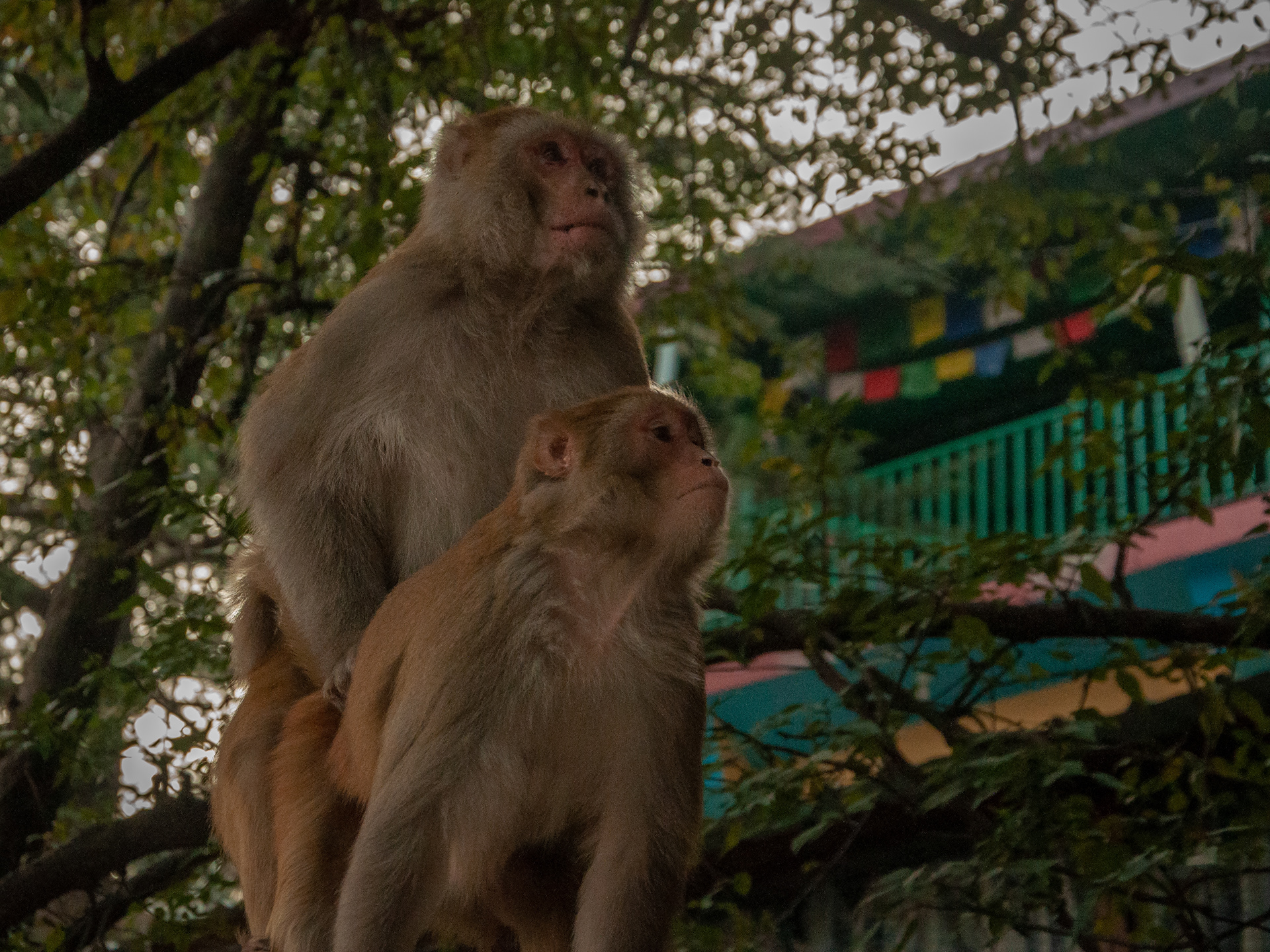 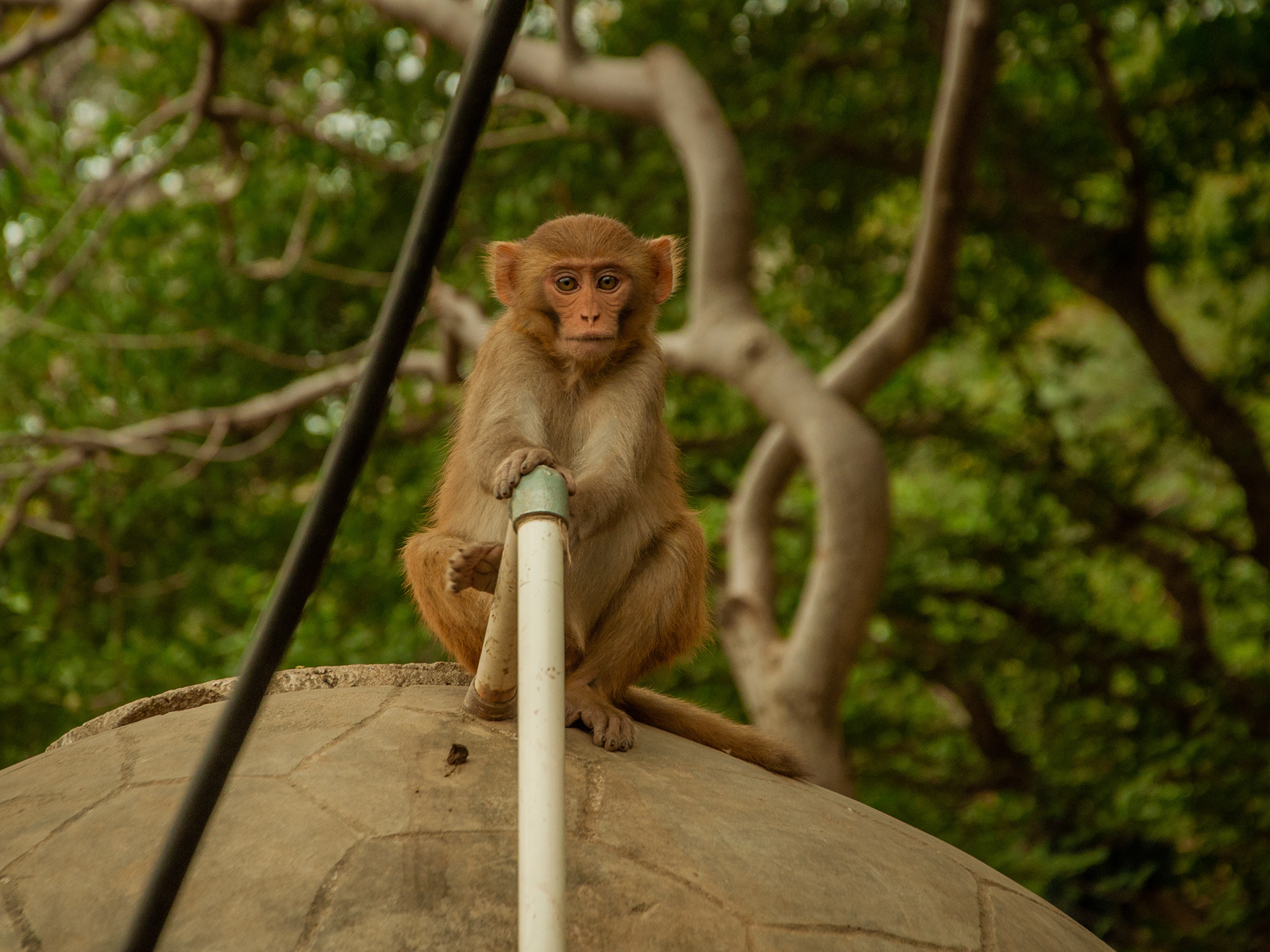 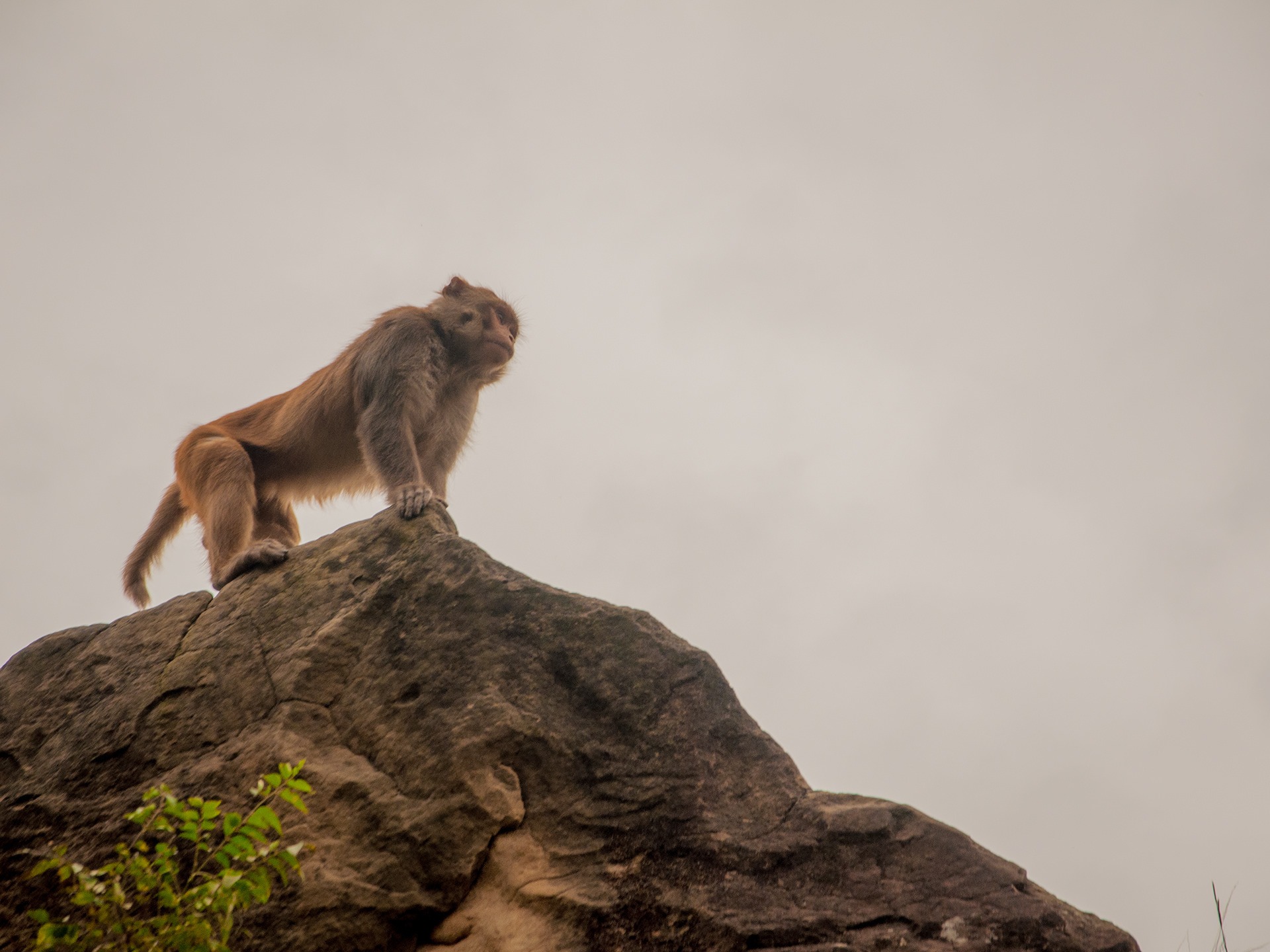 Kappe Mattu Raita (The frog and the farmer)

Link To The Future

The Frog Giggers of Indiana

The Naga and The Frog